What Is Nugenix And Does It Really Work?

Step into any health supplement store, and you'll find shelves lined with bottles claiming to boost your testosterone, improve your virility, and fill out your body with muscle. Of these seemingly countless products, Nugenix is perhaps the most popular. Several years ago, Nugenix was so popular that GNC, its main distributor, couldn't keep it in stock. While this popularity might have died down a bit, this product is still the best-selling male vitality product GNC sells.

Heralded by athletes as the solution to aging on daytime television, enough people believe in Nugenix claims to keep this product in the best-selling spot. But how many of these claims have support from real science and research? And if Nugenix does really work, how does it stand up to other testosterone boosters currently on the market? We sought out the answers to these questions.

What Is Low Testosterone?

Testosterone is the primary male sex hormone, responsible for things like facial hair, a deeper voice, higher aggression, and more muscle mass. Although women have small amounts of testosterone in their bodies, it's generally not enough to produce these stereotypically male traits. A notable drop in testosterone levels is normal as a man ages, like how women enter menopause. Natural testosterone levels begin to decline around age 30 for most men. This decline happens at a rate of about one percent per year.

As our population's average age increases, health issues like low testosterone have moved to the forefront of many men's minds. While age is not the only thing that can cause low testosterone — testicular injury, cancer, and diabetes are just a few of the other potential causes — it is arguably the most common reason. To an extent, declining testosterone levels are a completely normal part of life. But this knowledge doesn't necessarily make the symptoms any easier to live with.

Yes, many of these symptoms are normal parts of aging. But some research suggests that taking steps to improve your health and keep your testosterone levels elevated can help hold these symptoms off for a few extra years. Although some of these symptoms are superficial, such as hair loss, other changes like decreased muscle mass and weak bones can have a direct impact on your physical capabilities as you continue to get older.

How Do You Treat Low Testosterone Levels?

Medical professionals can prescribe and administer testosterone injections. While these injections are sometimes mistaken for athletic steroids, they can be life-changing for men suffering from low testosterone. However, some men aren't ready to take the plunge into these injections, called testosterone replacement therapy. This could be because of price, dislike of constantly visiting a doctors' office, or negative side effects.

Over-the-counter supplements like Nugenix are commonly called testosterone boosters. Unlike testosterone injections, which add outside testosterone to your body, these boosters use herbs and chemicals that encourage your body to create more of its own testosterone. Companies market these supplements in a variety of ways, from athletic performance supplements to treatment for erectile dysfunction.

Testosterone boosters are notorious for their hefty claims backed by questionable research, and Nugenix is no different. While this supplement certainly won't make you look like a bodybuilder overnight, how effective is its formula at naturally boosting male testosterone? To find out, we compared Nugenix's product information and claims with independent reviews and experiences.

We also chose two other popular testosterone boosters to compare against Nugenix. We looked at ingredients and customer experiences, as well the overall value of each product. Our final thoughts on how all of the supplements compare to each other are at the end.

No other testosterone booster has quite the popularity and name recognition of Nugenix, but we tried to choose two of the most popular ones available regardless. For our two comparison products, Alpha JYM and TestoFuel, we looked at their ingredients, what research was available for these ingredients, customers reviews and ratings, and pricing. 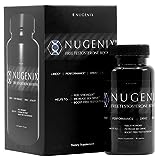 Over the past few years, several lawsuits have emerged claiming that Testofen does not offer the benefits claimed by testosterone booster manufacturers. Testofen's makers settled this lawsuit in July of 2018, but there is still some controversy surrounding the company's claims. Does Testofen have no beneficial impact on testosterone levels at all? Or were the claimed benefits just exaggerated for marketing purposes? Right now, the answer to these questions is unknown.

The Nugenix Free Testosterone Booster is rated 3.3 out of 5 stars by Amazon customers. Positive reviewers saw an increase in energy levels, a higher sex drive, and improved muscle mass. Negative reviews mentioned seeing no improvement in their testosterone levels through bloodwork increased blood pressure, and that the product had no overall effect. Some reviewers also experienced issues with this supplement upsetting their stomachs.

The Nugenix Free Testosterone Booster retails for between $ and $$ for a 90-count bottle. The suggested serving is three pills per day so that this bottle will last about a month. This Nugenix supplement is available on Amazon, the Nugenix website, GNC, Walgreen's, and The Vitamin Shoppe. 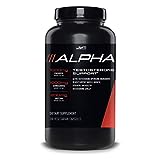 Our first Nugenix competitor is Alpha JYM. Alpha JYM claims to both help your body increase its natural testosterone production and prevent free testosterone from leaving your body. It also lists many other claims, such as increased sex drive, cognitive focus, more muscle mass, and less body fat. But Alpha JYM is careful to say that this supplement is not a steroid and will not magically transform your body.

Alpha JYM contains six primary ingredients. The first ingredient is fenugreek extract, which is very similar to the Testofen found in Nugenix. Alpha JYM also contains ashwagandha root, damiana, DIM, Eurycoma, and quercetin. A past study showed increased sperm count and mobility in a test group given ashwagandha rather than a placebo. While this isn't a clear indicator of higher testosterone, the two are certainly related. Damiana used traditionally as an aphrodisiac, but there is little modern evidence that it plays a direct role in testosterone production. High doses of DIM might have anti-estrogen capabilities. Eurycoma and quercetin are both reported to improve testosterone production, but many studies contradict these claims.

This testosterone booster retails for between $ and $$ for a 180-count bottle. The suggested serving is three capsules twice per day, so this bottle is still only a month's supply. However, it is slightly cheaper than the Nugenix testosterone booster. This supplement is available from Amazon and GNC.

Pro Test Boost is rated 2.8 out of 5 stars by Highya reviewers. Pro Test Boost is not sold on Amazon, so reviews are not available from its customers. Positive reviewers saw increased energy, improved physical appearance, and better sleep. Negative reviews saw zero results from the supplement, said it triggered headaches and didn't have any effect on their testosterone levels. Just like Nugenix and Alpha JYM, some reviewers experienced stomach upset after taking this testosterone booster.

Pro Test Boost retails for between $ and $$ for a 120-count bottle. The recommended serving is four capsules per day so that a bottle will last about one month. This testosterone booster is only available from the  Pro Test Boost website.

After our research of these three testosterone boosters, we found several pros and cons to their use. While Nugenix was our primary focus, these benefits apply to Alpha JYM and Pro Test Boost, too.

Unfortunately, there are quite a few drawbacks to using any of these testosterone boosters, including Nugenix. While the decision to use these products is ultimately up to you, here are some of the cons we found during our review:

In the end, we feel the research supporting Nugenix and other, competing testosterone boosters is pretty weak. There are really no definitive studies showing that these supplements have any effect on actual testosterone readings. At best, you could see a slight increase in your virility and energy levels. But at worst you could ingest unregulated, toxic chemicals and experience side effects like stomach upset and vomiting.

If you truly want to raise your testosterone levels naturally, without injections, then we suggest trying diet and exercise first. These methods might not be as easy as popping a few pills every day, but they have real research and data backing up their effectiveness. Even if you don't see a notable increase in your testosterone, leading a healthy lifestyle will do you and your body a world of good.

If you feel the need to take a supplement, a multi-vitamin designed for aging men will probably be just as effective as any of these testosterone boosters. After all, zinc and other vitamins and minerals are the only ingredients in these products with any definitive research behind them. Everything else is probably just clever marketing.