Bowflex Weight Review: What Nobody Else Is Telling You

They're one of the most popular brands in fitness, but the Bowflex weights aren't what you normally see in the average home gym. For instance, these things are pricey. We're talking time-to-pull-out-the-credit-card pricey. Second, Bowflex went all out making these dumbbells look futuristic-- and they almost got it right. The design of these Bowflex weights is a little offputting the first time you see them. So what you end up with are weird futuristic-looking adjustable weights with a massive price tag. They stick out like a sore thumb.

But there's a lot about these Bowflex weights that they got right. I gave them a try at my local Walmart and, despite some weird looks from mothers with their children, I enjoyed them. They took some getting used to, especially when I tried to range through the different weight levels. Make no mistake, there's a learning curve here, but once you get it, you may find yourself coming back to the Bowflex weights. My experience with them was short-lived, and I haven't seen them anywhere else. It also begs the question, why does Walmart put their fitness equipment right next to the toy section?

One look at a set of Bowflex weights and you'll immediately see how different they are. For starters, the weight discs themselves look unfinished. They are more of a horseshoe design around a center handlebar with a large dial at one end. Think of the internals of a combination lock, and you'll get a sense of what Bowflex weights look like. With Bowflex weights, you only need one set of weights because these adjustable dumbbells range from 5 pounds to 52 pounds, in 5-pound increments. While they're not the only adjustable weights you can get, they are certainly the most striking.

Who are they for?

Bowflex weights are adjustable, so they don't take up too much space. That leads us to believe that Bowflex wants you to put their weights in your home gym. This makes sense, considering the Bowflex philosophy of fitness at home. However, once you see the pricing of these weights, we have to wonder who Bowflex is really going after. Not only are they incredibly expensive, but there are more affordable weights out there that you can use in the home.

If, however, you are a Bowflex fan, then these adjustable dumbbells might be right up your alley.

How much do they cost?

And that brings us to the sore spot: the price. You can expect to pay between $250 and $400 for a set of two Bowflex weights. At these prices, you would expect pro-level gyms to be stocking them, but they're not. The reason for that is that these weights are consumer-level, with professional-level pricing. Bowflex is the Apple of fitness, and if you want futuristic-looking adjustable weights, be prepared to pay the Bowflex tax.

We didn't just pump iron in the middle of Walmart to bring you this review. We also sorted through as much information as we could find on the Bowflex weights, including retailer information from Amazon. Then, we read through Amazon customer reviews to get a sense of what people had to say about these crazy-looking weights. That gave us some real-world perspective that my curls near the Lego display couldn't provide. Finally, looked at some Bowflex competitors to see if their weights were any better and, more importantly, had a nicer price tag.

These Bowflex weights give you 30-different dumbbells in one. There's no need to buy weight racks or have a pile of dumbbells laying around. Furthermore, the weight discs themselves feature a durable molding around their edges so they slip into and out of the weight stand quietly.

When it comes to home gyms, Bowflex has been at the forefront of marketing for years. At one point, Chuck Norris graced late-night infomercials for Bowflex total home gyms. However, just because Bowflex weights have a well-funded marketing machine behind them, doesn't mean they're all great. Like anything, they come with pros and cons.

How Do They Stack up to Other Weights?

If there's one thing we love doing before we recommend a product to our fans, it's comparing that product to the competition. There are enough players in the fitness market to allow us to get a decent idea of what's good, what's rotten, and what's awesome. We put the Bowflex weights to the test by comparing them with Yes4All adjustable weights, Merax Deluxe adjustable weights, and CAP adjustable barbell weights. Finally, we took a look at a relative newcomer on the scene, Amazon Basics weights, to see if you could save a bunch of money. 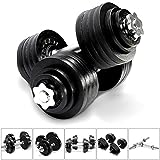 First up in our comparison are the adjustable dumbells from Yes4All. These look just like any other solid metal dumbbell, complete with a chrome handle and black cast-iron plates. Each plate is 5 pounds and can be added or removed by way of a steel nut at either end of the handle. Simply unscrew the nut, add or remove the plates you want, and screw the nut back on. You can load up to 52.5 pounds per side, for a total of 105 pounds per arm.

Yes4All is a fairly new company. In 2010 they were a home appliance store in Anaheim that also stocked fitness equipment. Today they have a massive warehouse and fulfill most of their orders online through Amazon. Most of their products get manufactured in China, which allows them to pass significant savings on to the consumer. These adjustable weights cost between $50 and $100. Also, they come with an impressive five-year warranty. We love how confident Yes4All is in their weights.

Customers on Amazon also loved them, rating these adjustable weights 4.4 out of 5.0 stars. Almost everyone loved how many heavy cast-iron plates they could get for such a low price. One lifelong weight-lifter called it a "steal." Also, people praised how solid the weights are, instead of brittle like some other brands. However, a couple of people had problems with the star nuts not threading properly onto the handlebar. Thankfully there's a great warranty for cases like that. 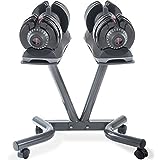 Next up is a set of adjustable dumbbells from Merax. These weights resemble an attempt at copying the Bowflex weights. In fact, if imitation were flattery than Bowflex must be honored. The Merax Deluxe weights feature the same U-shape plates as Bowflex and even sport the same black, red, and white color scheme. There are 12 adjustable weight settings in this set, although they increase by 5.5-pound increments.

Merax hails from Los Angeles, California. The brand began in 1995 as a "sell everything through Walmart" type of store. You can find Merax fitness equipment, pet accessories, furniture, kitchen appliances, and more. Merax has a major contract with Walmart, but also Amazon. Like the Bowflex weights, the Merax weights are not cheap. Expect to pay between $300 and $400 for a simple set of two with a stand. In another act of imitation, the Merax Deluxe weights come with a two-year warranty.

Customers on Amazon gave these weights 4.5 out of 5.0 stars. People loved the feel of the grip on the handlebar and the fact that the ends are capped with rubber. Customers also enjoyed that these weights go up to 75-pounds, which is a little higher than the Bowflex weights. However, quite a few customers noticed that the actual weights indicated on the plates are not accurate. Where one plate says "10 lbs," it's actually 8 pounds. 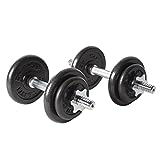 Next, we looked at the adjustable barbell from CAP, the world's largest manufacturer of weights. You've probably seen these CAP weights before. Most people have them in their home gyms, and many fitness clubs also stock CAP barbells. These are very basic, with a chrome handle and a series of weighted cast-iron plates that you can attach. Secure the lot with a threaded steel nut at the end of the barbell. These weights go up to 40-pounds each side, so they're not heavy. However, if you're not looking to for an ironman workout, these may be perfect for you.

CAP Barbell began its story in Texas in 1993. That's when the company filed its articles of incorporation, and a free-weight legend was born. All CAP Barbell weights and racks get manufactured in the US, and this is one reason so many fitness clubs love them. They trust that the weights and measurements will be accurate. Best of all, CAP adjustable barbells are affordable, costing between $35 and $50 for a set of two. However, they come with the worst warranty we've seen. It only protects your weights for 30 days.

Customers gave it 4.3 out of 5.0 stars. Most people said that these are no-nonsense weights that do their job. They don't break, and they're certainly not flimsy. One customer said that she would recommend these weights for anyone doing a low-intensity/high-rep workout. On the other hand, several people complained that the plates had a funky smell. A few people couldn't keep them in their home because they smelled so bad. They described the scent as a mix between a chemical plant and a dead skunk.

Finally, we wanted to take a look at a more traditional dumbbell. If you decide to stick with the basics and skip out on all the fancy (and expensive) adjustable weights, then AmazonBasics might be a good choice. These are fairly straightforward. You buy a set of weights or buy them individually. They are available in several weights, ranging from 10-pounds to 50 pounds. The weights themselves are solid cast-iron, but the hexagon ends have rubber around them. That's perfect for a home gym, where you want to avoid punching a hole in your floor if you accidentally drop one.

Back in 2009 Amazon stunned many of its electronics merchants when it released its own brand, AmazonBasics. That brand has since expanded to include everything from luggage to office supplies to fitness equipment. Amazon is able to leverage its massive supply chain and manufacture goods in China at steeply discounted prices. Lower prices for decent quality is the end result. For instance, these AmazonBasics dumbbells will cost you between $15 and $50 each. However, if you get a set of two for each weight, you're looking at paying more than $500. In this case, an adjustable weight set seems more economical.

Amazon customers rated the AmazonBasics rubber-encased hex dumbbells 4.5 out of 5.0 stars. Every customer said the dumbbells were solid and decent quality. They are also accurate in their weight measurement, and people praised the comfortable grip of the handlebar. However, a few people complained of the packaging oil these dumbbells come packed in. Apparently, it's smelly and makes a mess if you're not careful when opening the packaging.

Should You Buy Bowflex Weights?

All of this brings us to the ultimate question: should you buy a set of Bowflex weights? The answer is subjective. If you already have a Bowflex gym, or you want to start building one, then Bowflex weights will be a fantastic addition to it. However, if you're just a regular person who has put together their gym using the best deals they can find, or you want a simple set of weights to lift while sitting at home, then Bowflex weights are not for you. We can't recommend spending that money on these weights for most people.

On the other hand, Yes4All adjustable weights are perfect for almost anyone. They are easy to use, affordable, and rugged. Also, they come with the best warranty we've seen. Having your money protected by a five-year warranty is good for any product. For that reason, as well as for the overall quality of these weights, we recommend Yes4All weights over Bowflex weights.